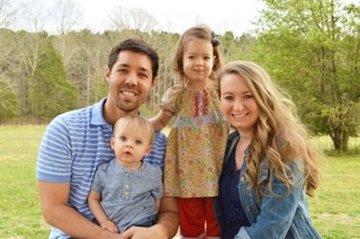 Danny Estave is an Alabama native and is the son of a Baptist minister. He is a graduate of the University of North Alabama where he received a Bachelor’s degree in Recreational Administration. Danny moved to North Carolina in 2010, where he earned his Master of Divinity in Christian Studies degree from Southeastern Baptist Theological Seminary in Wake Forest.
​
Prior to coming to CRBC, Danny has served as the Youth and Children’s Minister at West End Baptist Church in Henderson, NC, as Camp Director for LifeWay Fuge Camps in Jefferson City, TN, and as Assistant Director for Track-Out Camps at the A.E. Finley YMCA in Raleigh, NC. In addition, Danny has experience counseling individuals and families.

Danny and his wife Courtnie have two children. As a family they enjoy eating at new restaurants specifically seen on the Food Network. They also enjoy traveling to places neither has been before, taking afternoon wagon rides with their children, and in the fall watching Auburn football.
MIKE GREGORY | Music Director